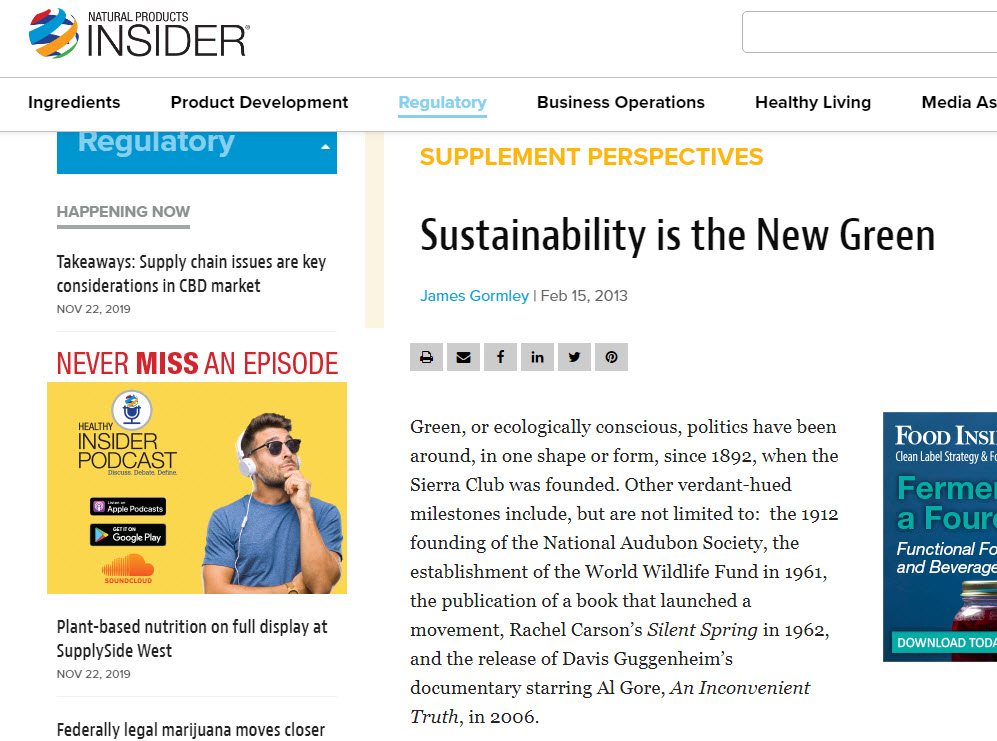 Green, or ecologically conscious, politics have been around, in one shape or form, since 1892, when the Sierra Club was founded. Other verdant-hued milestones include, but are not limited to: the 1912 founding of the National Audubon Society, the establishment of the World Wildlife Fund in 1961, the publication of a book that launched a movement, Rachel Carson’s Silent Spring in 1962, and the release of Davis Guggenheim’s documentary starring Al Gore, An Inconvenient Truth, in 2006.

While the green movement has been, and still represents, a path humanity must consider in order to preserve our planet and its people from total ecological collapse, global economic meltdown and social catastrophe, the recent eco-based climate push was considered by some to be “a total flop,” wrote New Republic’s Bradford Plumer in 2011.

“By late 2010, the main cap-and-trade bill had fizzled in the Senate [. . .] Greens ended up winning zilch from Congress, not even minor legislation to boost renewable electricity or energy efficiency,” added Plumer. “All those flashy eco-ads and all that tireless eco-lobbying only got us even further from solving climate change than we were in 2008.”

Plumer cites the 2011 publication of an 84-page report, Climate Shift, by American University’s Matthew Nisbet, which aimed to dope out why climate activism has flopped so badly in the past several years. Nisbet argued that greens were not badly outspent by industry and that media coverage was not the problem. He believes that greens used a much too simplistic approach, treating the complex macro issue of global warming as a simple, easily defined problem such as “acid rain,” and that they did not focus enough on boosting innovation and helping to make clean energy cheaper.

Aside from not engaging with voters and legislators in a powerful enough way regarding climate change, according to a Roper Green Gauge study released by GfK Research on September 24, 2012, “While 93% of consumers say they have personally changed their behavior to conserve energy in their household, they’re becoming less willing to pay more for green products,” wrote Advertising Age about the report.

Diane Crispell, GfK’s director, told the Examiner that the green-pushback from consumers appears to stem from several factors, including: cost; efficacy (that they don’t work well); and message fatigue due to years of “overpromise and hype.”

So if eco messaging doesn’t get us to where we want to go, what does? What if we took over from within? Enter: corporate social responsibility, which is sustainability put into practice in how businesses operate and engage in the world.

What is “sustainability”? According to the U.S. EPA, “Sustainability is based on a simple principle: Everything that we need for our survival and well-being depends, either directly or indirectly, on our natural environment. Sustainability creates and maintains the conditions under which humans and nature can exist in productive harmony, that permit fulfilling the social, economic and other requirements of present and future generations.”

Tim Mohin, author of Changing Business from the Inside Out: A Treehugger’s Guide to Working in Corporations (2012), wrote in Forbes that the unstoppable corporate (and political) march toward globalization will “continue to stretch the scope of corporate responsibility,” referring to the recent conflict minerals tracking rules created by the Dodd-Frank Financial Reform Act, as one example.

Mohin predicts ever-increasing “levels of transparency and disclosure” will become the norm, noting that, in 2011, over 5,500 companies across the globe issued sustainability reports, reports which don’t just note how many rolls of recycled toilet paper were purchased but describe the many ways companies are being good global citizens and investing in: education, human rights, health care, communities, social justice and a whole range of sustainable activities.

In addition, noted Mohin, not only are people who work for socially responsible companies 43% more efficient than their counterparts who work for non-CSR-focused companies, they are also 38% more loyal and enjoy a 55% higher level of morale.

And as far as the concern goes over green-bored customers, Mohin wrote that “Consumers are increasingly tuned in to sustainability when making their buying decisions.” He cites the Cone Communications 2010 Cause Evolution Study which notes that “even as cause marketing continues to grow, consumers are eager for more. In fact, 83 percent of Americans want more of the products, services, and retailers they use to support causes.”

With a world population that exceeded 7 billion in 2011, Mohin observes that, “The imperative to stretch resources even further will make sustainability a central design principle for the winning corporations of the future.”

While green labeling and marketing will continue to have a place, just as the meaning of “sustainable” means “to endure,” sustainability as an over-arching principle and governing force is not a fad or short-lived trend, but our last best chance to save lives, provide hope, ensure opportunity, grow responsibly, and, oh yeah by the way, also save the planet and all its inhabitants.

Sustainability truly is the new green.