‘Supplements Are Safe, Healthful and Well-Regulated’!

On March 25th, 1999, I was part of a live television debate on FOX-TV’s “Good Day New York” with a drug industry attorney on the topic: “Are dietary supplements regulated?”(1)

Needless to say, with all of the facts showing how well regulated dietary supplements were then, winning the debate was not a difficult accomplishment; I even had the host, Jim Ryan, on the side of supplement consumers about midway through the segment.

In fact, the regulations and laws governing nutritional supplements in 2011 are even more stringent than they were in 1999, when I did that show.

According to attorney Peter Barton Hutt, the “bedrock food safety requirement that has been the foundation of the American food supply since 1906 — the prohibition of poisonous or deleterious substances in food—applies equally to dietary supplements and conventional food” (2).

Supplements: A Super-Regulated Category
Today, dietary supplements have the following requirements and controls over them:

Regarding dietary supplements, the FDA has significant powers, including (but not limited to) the authority to:

Likewise, the FTC has a great deal of surveillance and enforcement powers that it uses for dietary supplements, including the ability to: challenge and stop advertising that is not sufficiently substantiated; negotiate a consent order for a company to change or fix its promotional, marketing or advertising practices; and to seek substantial civil penalties for violations of trade regulation rules or violations of cease and desist orders.

So Why Do We Keep Hearing About Supplements Being Unregulated? 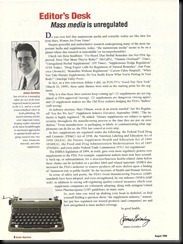 Part of the problem is the media.
As I noted way back in 1999 (1), despite powerful and authoritative research underpinning many of the most popular supplements today, the mainstream media appear to be on a planet where this research is unavailable or incomprehensible.

The FDA itself has also been stoking the misinformation fires about the supplement regulations that it is mandated to implement and enforce. As I noted in July 2009, “The FDA should cooperate with the responsible core of the natural products industry rather than criticizing the very laws that the American people saw fit to pass and which the FDA is sworn to uphold and enforce” (3).

Dietary supplements have “always been regulated as a category of food in this country, and DSHEA did not change that,” according to the Council for Responsible Nutrition (CRN) (4).

“Dietary supplements are not regulated as drugs because they are not drugs,” added Jeffrey Blumberg, PhD, FACN, director of the Antioxidants Research Laboratory at the Jean Mayer USDA Human Nutrition Research Center on Aging, at Tufts University (3).

According to Hutt, it is “apparent that FDA has adequate statutory authority to assure the safety of both dietary ingredients and conventional food ingredients” (2).

In fact, Hutt adds that the “safety provisions under the FD and C Act applicable to dietary supplements would appear to be stronger than those applicable to conventional food.”

‘Supplements Are Safe, Healthful and Well-Regulated’ may not be a very “sexy” story title as they go, but it is one that really should be front-page news.

Gormley Take-Away: Given all of the recent drug recalls and food contamination outbreaks, I would be much more concerned about the safety of pharmaceuticals and conventional foods than about dietary supplements if I were the average consumer advocate, legislator or reporter. Looking at the powerful safety record of dietary supplements, now officially demonstrated via the AER Law, I would consider beating a different drum than the one associated with unwarranted and uninformed attacks on supplements.