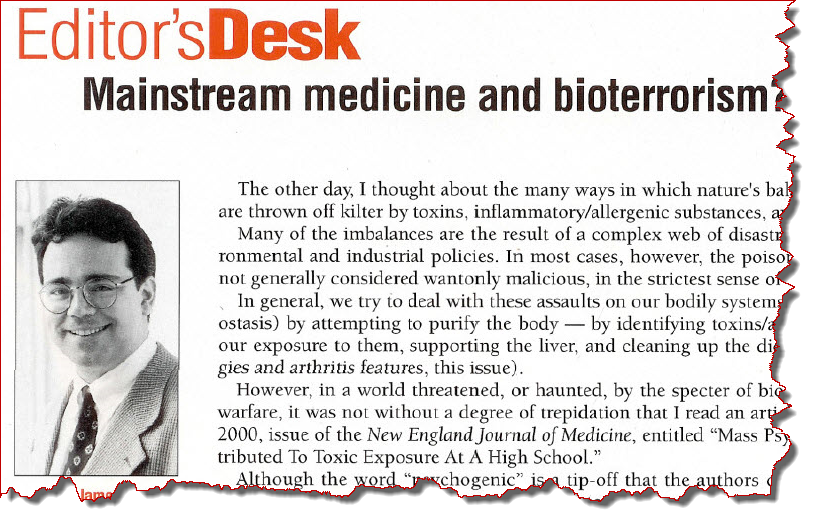 And by “she” I am referring to my editorial alma mater, Better Nutrition magazine, where I proudly served as editor in chief from 1995 to 2002, which is celebrating its 75th anniversary beginning with the August 2013 issue.

Better Nutrition has always stayed true to its mission and has constantly worked very hard to never let down its readers. It has a unique and trustworthy way of getting into people’s hands, too, via consumers’ favorite health-food stores.

The magazine has never been afraid to be out first on issues of great importance to its readers, whether breaking an environmental health story about the dangers of the Yucca Mountain nuclear waste repository (‘Physicists warn: nuclear waste-site dangers exist,’ September 1995), or a commentary on nutritional genocide (‘Iodine deficiency in China — a crucial lesson for the U.S.’, August 1996), or an editorial in total support of St. John’s wort when most media outlets were publishing unfounded hit pieces (‘St. John’s wort is safe,’ June 2000).

With its editorials and its articles, Better Nutrition also helped re-popularize integrative medicine in the U.S. and was on the vanguard of the successful fight (between 1997 and 1998) to force the USDA to propose new USDA Organic standards that adhered to the right principles.

The magazine has also never shied away from publicly defending the science and safety behind dietary supplements, whether in testimony I had an opportunity to deliver at the New York City Council ephedra hearings in 2000 or when I had a chance to “take on” pharma industry attorneys on FOX-TV’s ‘Good Day New York.’

Better Nutrition was the first health and nutrition magazine to commit to a rigorous focus on science in all of its reporting, an approach that was later emulated by other magazines. In addition, the magazine has been part of a movement that changed the nation’s mind-set from ‘5-a-day’ and mainstream ‘healthcare’ to optimal nutrition and integrative health.

The magazine has also never been afraid of getting personal, either, whether the topics were fear, the inspiration of Patch Adams, happiness, hope or thankfulness. In fact, readers have consistently shown their appreciation for Better Nutrition articles that inspired them, encouraged them or gave them hope.

In January 2000, Better Nutrition printed a letter from Ronee Groff, president of the Learning Disabilities Association (LDA) of New Jersey, who wrote in about my December 1999 editorial, ‘Pass the squash, hold the fear: Meditations on racoons and a fear-free holiday season.’

She pointed out in her letter how fear, anxiety, worry and apprehension are a great part of the lives of people who are struggling with learning disorders. She wrote: ‘We believe it [the commentary] to be a wonderful piece, and we would love to communicate your words to those we believe would enjoy, and receive some strength from, the message.’

In July 2001, a reader from Mission Hills, Kansas, send in a card about the February 2001 commentary, which was entitled, ‘Never stop dreaming.’ His card, which I have kept on my own bulletin board for the last 12 years, reads: ‘I want to congratulate you on a most wonderful editorial, ‘Never stop dreaming.’ It is kept at my desk as a reminder to stop and look up. Thank you for putting a simple thought into words.’ ”

Better Nutrition gave me the chance to learn quite a lot about nutrition: where we are, where we should be, and what can help get us there nutritionally. I’ve had such amazing opportunities, too, to learn and grow, including a press trip to China in 2001, a life-changing experience that I will never forget.

I have met so many caring and committed health-food retailers over the years, people who are truly on the front lines of health freedom.

It’s given me the chance to learn about the regulations which support our right to high-quality, high-potency and innovative dietary supplements and about the political and economic forces which are taking aim at those rights, one of the reasons I decided to write Health at Gunpoint.

I am thankful to editor-in-chief of Better Nutrition today, Nicole Brechka, who gave a shout-out to me in the anniversary issue’s editorial and to Vera Tweed in her history of the natural products industry this same issue.

From the bottom of my heart, I wish Better Nutrition another 75 groundbreaking, conscious-raising years of commitment and service to American consumers and the health-food stores where they shop!